In these lessons, we will learn
The following diagram gives some general rules for possessive nouns. Scroll down the page for more examples and rules. 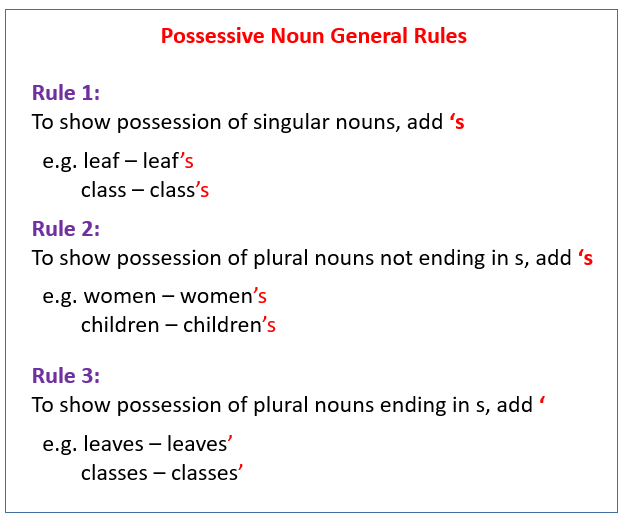 What are Possessive Nouns?

1. Possessive nouns can be used to show 'belonging to' or 'ownership'.

This is Jill’s house. (Jill owns the house)
They were not able to find Paul’s shoes. (The shoes belong to Paul)
The cat’s dish is empty.
The lamp's base is broken.

2. Possessive nouns can show where someone works or studies or spends time.

I went to Jack’s school.
Put this box in Colin’s office.

Gordon’s mother is a dentist.
He went with Brian’s brother.

Add an apostrophe s (‘s) to form the possessive of plural nouns that do not end with s.

Add an apostrophe (‘) to form the possessive of plural nouns that end with s.

For the names of people that end with s, add an apostrophe s (‘s) or apostrophe (‘). (Both methods are acceptable)

Add an apostrophe s (‘s) or apostrophe (‘) to the end of a compound noun.