Countable Nouns can be singular or plural.
In these lessons, we will learn singular countable nouns and the different spellings for plural nouns.


The following table gives some rules for forming plural nouns. There are some exceptions. Scroll down the page for examples and explanations. 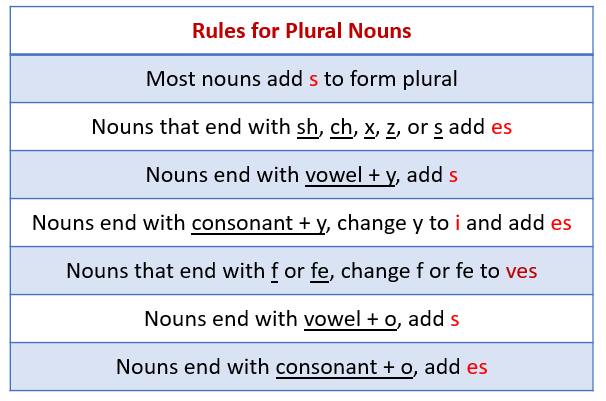 When we are talking about just one person, animal, place or thing, we use a singular countable noun.

Here are some countable nouns that are in the singular.

When we are talking about two or more people, animals, places or things, we have to make the countable nouns plural.

When the last letters of singular nouns are ch, sh, s or x, you usually add es to form the plural. Some exceptions are stomach and monarch where you add s instead of es. This is because the ch in these words sounds like k.

Learn English - Singular Nouns and Plural Nouns
This tutorial describes the difference between singular and plural nouns, as well as other number class related issues. Forming Plural Nouns with s
This video explains the difference between singular nouns and plural nouns. It shows that when we have 2 or more we use the plural form. It also explains that the plural form is made by adding -s to the noun base. Forming Plural Nouns with es
When a singular noun ends in the letter s, ss, x, ch, or sh, it will usually become a plural by adding an -es. Forming Plural Nouns
When the singular noun ends with a y, the plural noun is formed by removing the y and adding an -ies Plural Irregular Noun
This video shows how some popular irregular nouns change in the plural form. These nouns do not add the "s" at the end of the word.
For eg. man becomes men, woman becomes women, child becomes children, person becomes people, foot becomes feet, tooth becomes teeth, mouse becomes mice, goose becomes geese. Some nouns do not change when they become the plural form, for example, fish and deer. Some examples of Collective Nouns
A school of fish, a swarm of bees, an audience of listeners, a bouquet of flowers, a bunch of bananas, a forest of trees, a galaxy of stars, a pride of lions, a litter of kittens, a crew of sailors, a range of mountains.