In these lessons, we will learn
The following table gives the Possessive Pronouns and Possessive Adjectives. Scroll down the page for more examples and explanations. 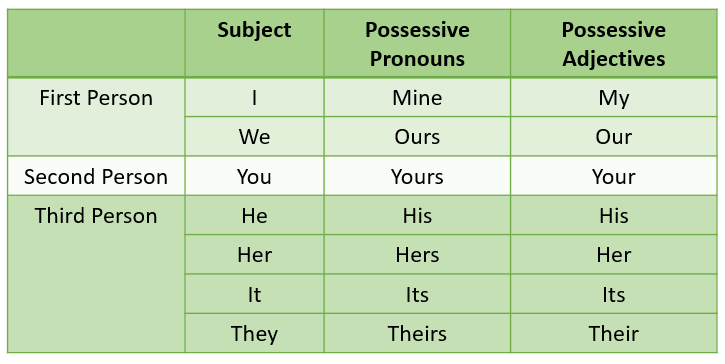 A pronoun is a word that takes the place of a common noun or a proper noun.

The words mine, yours, his, hers, its, ours and theirs are called possessive pronouns. They are used to substitute nouns to show possession or ownership.

His boat is faster than mine. (mine substitutes that word boat and shows that it belongs to me)

This is my car and that is yours. (yours substitutes the word car and shows that it belongs to you)

A possessive pronoun can act as a subject of a sentence.

His will only arrive tomorrow.
Ours is the yellow one in the room.

A possessive pronoun can act as a subject complement.

This house is hers.
Is this kitten ours?

This bag is mine. (mine is a possessive pronoun)

This is my bag. (my is a possessive adjective, it comes before the noun bag)