The following figure shows Joint Variation. Scroll down the page for more examples and solutions of Joint and Combine Variations. 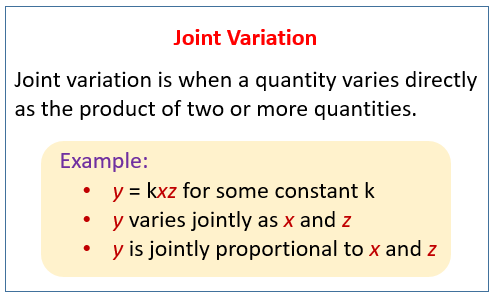 
Joint Variation Application
Example:
The energy that an item possesses due to its motion is called kinetic energy. The kinetic energy of an object (which is measured in joules) varies jointly with the mass of the object and the square of its velocity.
If the kinetic energy of a 3 kg ball traveling 12 m/s is 216 Joules, how is the mass of a ball that generates 250 Joules of energy when traveling at 10 m/s? Distinguish between Direct, Inverse and Joint Variation
Determine whether the data in the table is an example of direct, inverse or joint variation. Then, identify the equation that represents the relationship.

2. The amount of oil used by a ship traveling at a uniform speed varies jointly with the distance and the square of the speed. If the ship uses 200 barrel of oil in traveling 200 miles at 36 miles per hour, determine how many barrels of oil are used when the ship travels 30 miles at 18 miles per hour.

3. Designer Dolls found that the number of its Dress Up Doll sold, N, varies directly with their advertising budget, A, and inversely with the price of each doll, P. When $54,000 is spent on advertising and the price of the doll is $90, then 9600 units are sold. Determine the number of dolls sold if the amount of the advertising budget is increased to $144,000. Combined Variation
Example:
y varies jointly as x and z and inversely as w, and y = 3/2, when x = 2, z =3 and w = 4. Find the equation of variation.