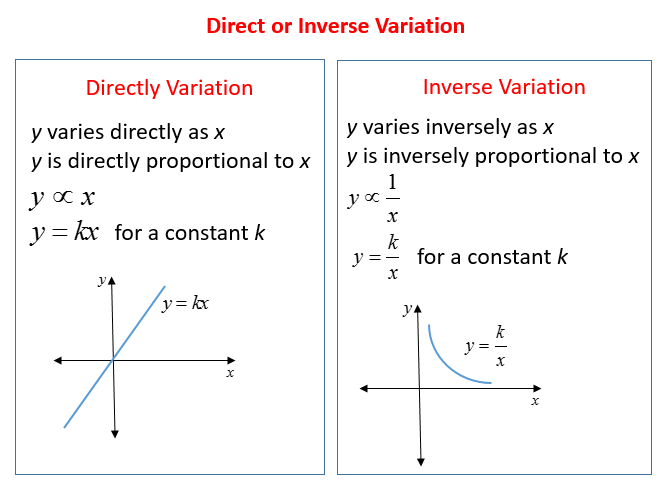 What is Direct Variation?


There are many situations in our daily lives that involve direct variation.

For example, a worker may be paid according to the number of hours he worked. The two quantities x (the number of hours worked) and y (the amount paid) are related in such a way that when x changes, y changes proportionately such that the ratio

We say that y varies directly with x. Let us represent the constant by k, i.e.

If y varies directly as x, this relation is written as y ∝ x and read as y varies as x. The sign “ ∝ ” is read “varies as” and is called the sign of variation.

b) Substitute x = 15 into the equation

c) Substitute y = 6 into the equation

What is the direct variation formula?
A direct variation is a linear equation that can be written in the form y = kx , where k is a nonzero constant. The number k is called the constant of proportionality or constant of variation.
Graphically, we have a line that passes through the origin with the slope of k.

Other Forms Of Direct Variation

The area A of a circle of radius r is given by the equation A = pr2, where p is a constant

The following video gives some practical examples of direct variation and indirect/inverse variation. How to solve word problems involving direct and inverse variation squared?
Examples:
1. On planet X, an object falls 18 feet in 2 seconds. Knowing that the distance it falls varies directly with the square of the time of the fall, how long does it take an object to fall 29 feet? Round your answer to three decimal places.
2. The Intensity, I, of light received from a source varies inversely as the square of the distance, d, from the source. If the light intensity is 4-foot candles at 11 feet, find the light intensity at 13 feet.