In these lessons, we will learn how a quantity varies in relation to two or more other quantities.

The following diagrams give the different types of variation: Direct Variation, Inverse Variation, Joint Variation, and Combined Variation. Scroll down the page for examples and solutions. 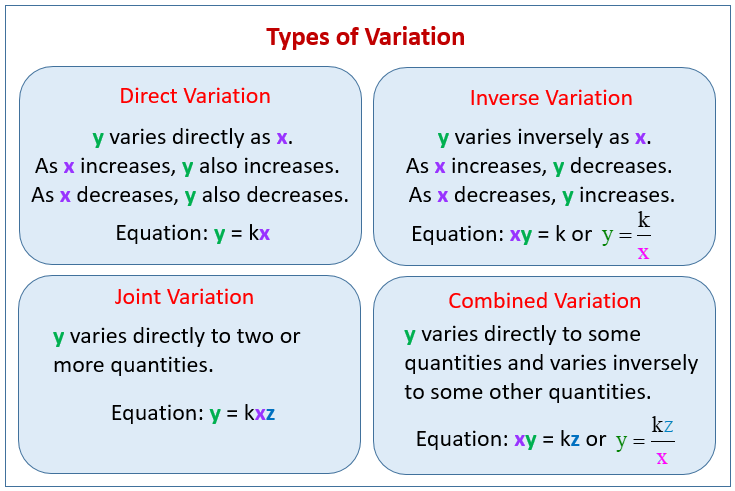 What is Joint Variation and Combined Variation?

Joint variation is a variation where a quantity varies directly as the product of two or more other quantities. For example, the area of a rectangle varies whenever its length or its width varies. We say that A ∝ lw, where A is the area, l is the length and w is the width.

Combined variation is a variation where a quantity depends on two (or more) other quantities, and varies directly with some of them and varies inversely with others.


Example 1: A quantity varies inversely as two or more other quantities.

The figure below shows a rectangular solid with a fixed volume. Express its width, w, as a joint variation in terms of its length, l, and height, h.

In other words, the longer the length l or the height h, the narrower is the width w.


Example 2: A quantity varies directly as one quantity and inversely as another.

The speed, s, of a moving object varies directly as the distance traveled, d, and varies inversely as the time taken, t. Express s as a joint variation in terms of d and t.

In other words, the longer the distance or the shorter the time, the faster is the speed.

How to solve Joint Variation problems?
Example:
Suppose y varies jointly as x and z. What is y when x = 2 and z = 3, if y = 20 when x = 4 and z = 3? Joint Variation Problems
Example:
z varies jointly with x and y. when x = 3, y = 8, z = 6. Find z, when x = 6 and y = 4. How to solve Joint Variation Word Problems and Applications?
Example:
The energy that an item possesses due to its motion is called kinetic energy. The kinetic energy of an object (which is measured in joules) varies jointly with the mass of the object and the square of its velocity.
If the kinetic energy of a 3 kg ball traveling 12 m/s is 216 Joules, how is the mass of a ball that generates 250 Joules of energy when traveling at 10 m/s? Direct, Inverse and Joint Variation
Example:
Determine whether the data in the table is an example of direct, inverse or joint variation. Then, identify the equation that represents the relationship.