In these lessons, we will learn how to solve weighted average problems.

The following table gives the formulas for average problems: Weighted Average, Mean, and Average Speed. Scroll down the page for examples and solutions. 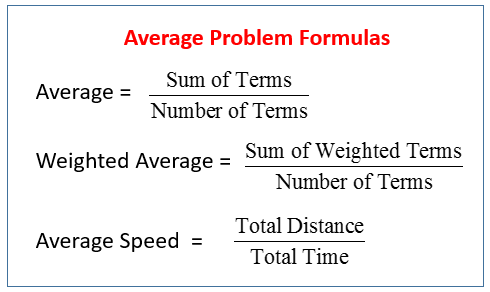 The formula for weighted average is:

Solution:
Step 1: To get the sum of weighted terms, multiply each average by the number of students that had that average and then sum them up.

Answer: The average score of the whole class is 68.

Be careful! You will get the wrong answer if you add the two average scores and divide the answer by two.


Example of how to calculate the weighted average

How to find the weighted average given a frequency table?

How to solve Weighted Averages and Mixture Problems?
Mixture problems are problems in which two or more parts are combined into a whole.