Distance problems are word problems that involve the distance an object will travel at a certain average rate for a given period of time.

The formula for distance problems is: distance = rate × time or d = r × t.

It would be helpful to use a table to organize the information for distance problems. A table helps you to think about one number at a time instead being confused by the question.

The following diagram shows how to solve Distance Word Problems using a table. Scroll down the page for examples and solutions. 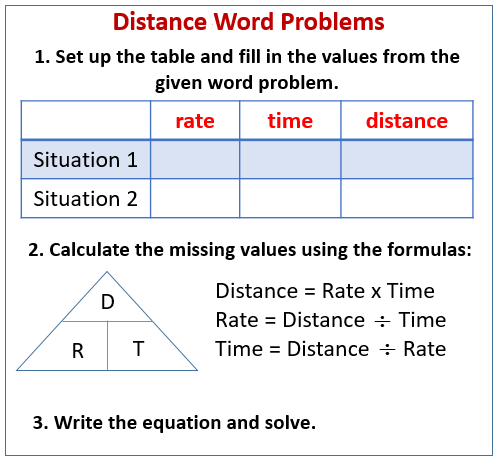 
Step 2: Fill in the table with information given in the question.


Step 3: Fill in the values for d using the formula d = rt


Step 4: Since the distances traveled in both cases are the same, we get the equation:

Step 5: Beware - the question asked for “how many more minutes would it have taken to make the trip”, so we need to deduct the original 6 hours taken.

Answer: The time taken would have been 40 minutes longer.