In these lessons, we will look at angles at standard position and coterminal angles.


An angle is said to be in standard position if it is drawn on the Cartesian plane (x-y plane) on the positive x-axis and turning counter-clockwise (anti-clockwise).

Co-terminal angles are angles which when drawn at standard position share a terminal side. For example, 30°, -330°, 390° are all coterminal.

The following diagram shows the coterminal angles 30°, -330°. Scroll down the page for more examples and solutions. 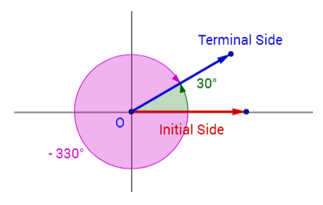 We can find the coterminal angles of a given angle by using the following formula:

Coterminal angles of a given angle θ may be obtained by either adding or subtracting a multiple of 360° or 2π radians.

Two angles are coterminal if the difference between them is a multiple of 360° or 2π.

Determine if the following pairs of angles are coterminal


How to find Coterminal Angles?
This video discusses what it means for two angles to be coterminal, and discuss a quick method on how to decide if two angles are in fact coterminal. It also shows a couple of examples of finding angles that are coterminal to each other.
Examples:
a) Which of the following angles is coterminal with an angle of 135°?
185°, 495°, -30°