What is an Adjective?

An adjective modifies a noun or a pronoun.

To modify a word means to describe the word or to make its meaning more definite. An adjective modifies a noun or a pronoun by answering one of these questions.

What kind?, Which one? How many?

The following table gives examples of adjectives that answers the questions, What kind?, Which one?, How many/How much? Scroll down the page for more examples and explanations. 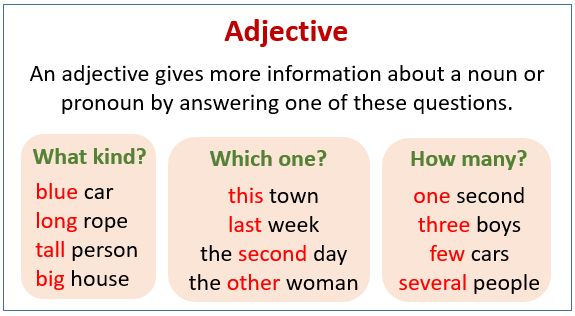 How are Nouns Used as Adjectives?

Sometimes you will find nouns used as adjectives.

The most frequently used adjectives are a, an and the. These little words are usually called articles.

A and an are indefinite articles; they refer to one of a general group.

A woman arrived.
An automobile went by.
He waited an hour.

Notice in the sentence, “He waited an hour.”, that an is used before a noun beginning with the consonant h, because the h in hour is not pronounced. Hour is pronounced as if it began with a vowel (like our). Remember that the sound of the noun, not the spelling, determines which indefinite article will be used.

The is the definite article. It indicates that the noun refers to someone or something in particular.

The woman arrived.
The automobile went by.
The hour for her departure finally arrived.

What are Possessive Adjectives?

The words my, your, his, her, its, our and their are considered pronouns in some books and adjectives in other books. They are called possessive adjectives and they come before a noun.

This is my house. (my is a possessive adjective)

What are Demonstrative Adjectives

The demonstrative adjectives this, these, that, those, and what are used as adjectives to modify nouns or noun phrases.

This apartment needs to be painted.. (this is a demonstrative adjective to indicate which apartment)

What are Interrogative Adjectives?

An interrogative adjective (which or what) modifies a noun or noun phrase.

Which book are you reading? (which is an interrogative adjective that modifies the noun book)

What are Indefinite Adjectives?

An indefinite adjective modifies a noun, pronoun or noun phrases.

Some examples of indefinite adjectives are: all, any, anyone, anything, each, everybody, everyone, everything, few, many, nobody, none, one, several, some, somebody, and someone.

There are some boxes in the romm. (some is an indefinite adjective that modifies the noun boxes)

How to use Adjectives in Sentences?

Usually, the adjective comes before the noun modified.

Kate gave each child here hot tea and apple pie.
The old, dusty book was found in her bag.

Books, old and dusty, were found in her room.

Other words may separate an adjective from the noun or pronoun modified.

They seemed quite happy.
Shawn was not being rude.
Courageous in battle, he deserved the award.

This video describes how adjectives are used in English. This is a basic explanation. Learn English - Adjectives Tutorial
This video teaches the grammar of adjectives. Comparative Adjectives
The following video explains how to use comparative adjectives.