In these lessons, we will learn
Related Topics: More Statistics Lessons 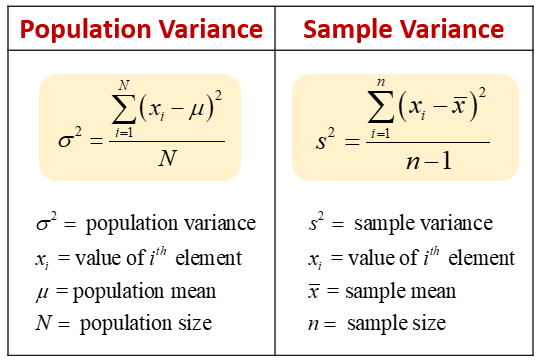 The variance is the average of the squared deviations about the mean for a set of numbers. The population variance is denoted by

. It is given by the formula:

The capital Greek letter sigma 𝚺 is commonly used in mathematics to represent a summation of all the numbers in a grouping.

N is the number of terms in the population.

How to calculate the variance of a population?

Variance as a measure of, on average, how far the data points in a population are from the population mean.

The formula for sample variance is:

Sometimes, books may give different formulas for variance.

We will now show how to derive these different formulas for variance.

How to derive the different alternate formulas for variance?
How to find the sample standard deviation using the computation formula?