Unit Vector and Components of a Vector

Related Topics:
Vectors
Unit Vectors in Physics
Next set of math lessons in this series


A unit vector is a vector with a magnitude of one unit.

Any vector has an associated unit vector in the same direction but having a magnitude of one. Any vector can be expressed as a scalar multiple of its unit vector.

The following diagram shows how to normalize a vector or how to determine a unit vector. Scroll down the page for more examples and solutions of how to find a unit vector. 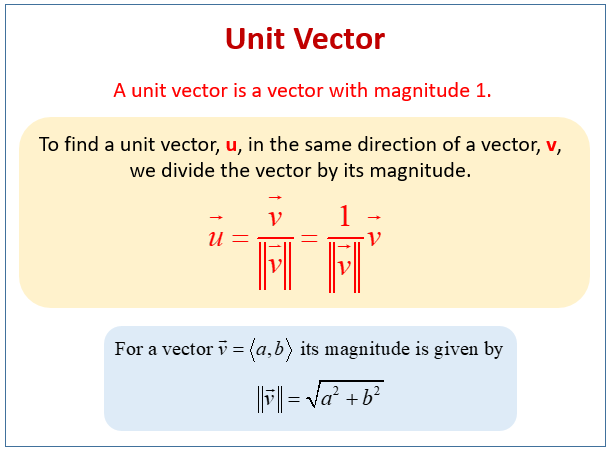 Finding the Unit Vector given a vector (divide the vector by its magnitude).


Unit vectors have a magnitude of one, and the specific unit vectors i and j represent the positive horizontal and vertical unit vectors in a two dimensional plane. We can write any two dimensional vector in terms of these two unit vectors, and that notation is often seen in Calculus.
How to express a vector algebraically in terms of the unit vectors i and j. This video explains how to determine a unit vector given a vector. It also explains how to determine the component form of a vector in standard position that intersects the unit circle. Expressing a vector as the scaled sum of unit vectors. Unit Vector Notation (part 2).
Showing that adding the i and j components of two vectors is equivalent to adding the vectors visually using the head-to-tail method. Next set of videos in this series