A pronoun is a word that takes the place of a common noun or a proper noun.

Relative Pronouns take the place of nouns or pronouns. They are called relative pronouns because they always relate back to something or someone else. They are used to join two sentences about the same person or thing.

In this lesson, we will learn when to use each of the relative pronouns: "who", "whom", "which" and "that". 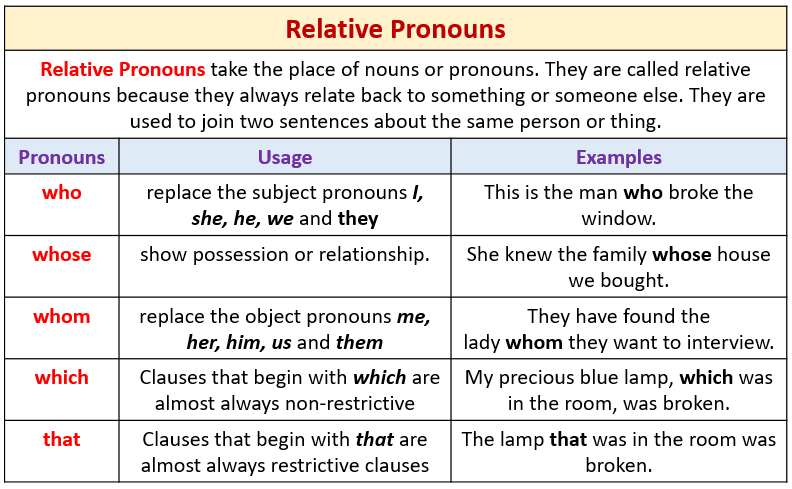 The main relative pronouns are: who, whose, whom, which, and that. We use who, whose and whom to make statements about people; which to refer to things; that to refer to either people or things.

This is the man who broke the window. (who refers back to man)

I have a friend whose mother drives a taxi. (whose refers back to friend)

Here is the car which she bought for her son. (which refers back to the car)

It is the kind of dress that I like. (that refers back to the dress)

She is a person that can be trusted. (that refers back to person)

Other forms of relative pronouns include whoever, whomever, whatever, and whichever.

We use who to replace the subject pronouns I, she, he, we and they.

Where is the waiter who served us? (She served us - who replaces she)

We use whom to replace the object pronouns me, her, him, us and them. However, the use of whom is becoming less common, especially in the United States, and who is usually used instead of whom.

The lady whom they caught was sent to prison. (They caught her – whom replaces her)

When to use "Whose"

We use whose to show possession or relationship.

I have a friend whose mother drives a taxi.

She knew the family whose house we bought.

The woman who is standing at the door is his sister.

Jane, who is standing at the door, is his sister.

In the first sentence, the clause who is standing at the door is important because it identifies the woman.

In the second sentence, the clause who is standing at door is extra information. In order to indicate that it is nonrestrictive we use commas before and after the clause.

When to use "That" and "Which"