The Mean as a Balance Point

In this lesson, the “balance” process was developed to provide another way in which the mean characterizes the “center” of a distribution.
• The mean is the balance point of the data set when the data are shown as dots on a dot plot (or pennies on a ruler).
• The difference formed by subtracting the mean from a data point is called its deviation.
• The mean can be defined as the value that makes the sum of all deviations in a distribution equal to zero.
• The mean is the point that balances the sum of the positive deviations with the sum of the negative deviations.

The following figures show the Mean as a Balance Point. Scroll down the page for examples and solutions. 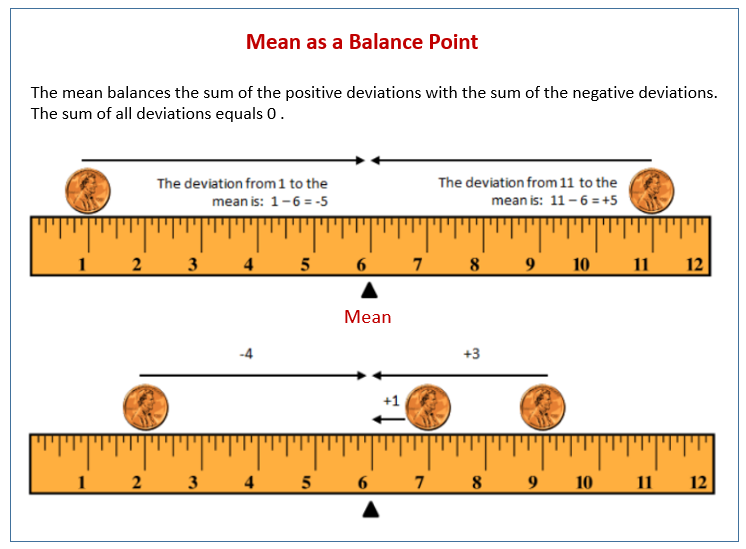 Example 1: The Mean as a Balance Point
Sabina wants to know how long it takes students to get to school. She asks two students how long it takes them to get to school. It takes one student 1 minute and the other student 11 minutes. Sabina represents these data on a ruler putting a penny at 1 and another at 11 and shows that the ruler balances on the eraser end of a pencil at 6. Note that the mean of 1 and 11 is also 6. Sabina thinks that there might be a connection between the mean of two data points and where they balance on a ruler. She thinks the mean may be the balancing point. What do you think? Will Sabina’s ruler balance at 6? Is the mean of 1 and 11 equal to 6? Sabina shows the result on a dot plot.

Sabina decides to move the penny at 1 to 4 and the other penny from 11 to 8 on the ruler, noting that the movement for the two pennies is the same distance but in opposite directions. She notices that the ruler still balances at 6. Sabina decides that if data points move the same distance but in opposite directions, the balancing point on the ruler does not change. Does this make sense? Notice that this implies that the mean of the time to get to school for two students who take 4 minutes and 8 minutes to get to school is also 6 minutes.

Exercises 1–2
Now it is your turn to try balancing two pennies on a ruler.
1. Tape one penny at 2.5 on your ruler.
a. Where should a second penny be taped so that the ruler will balance at 6?
b. How far is the penny at 2.5 from 6? How far is the other penny from 6?
c. Is the mean of the two locations of the pennies equal to 6?

2. Move the penny that is at 2.5 two inches to the right.
a. Where will the point be placed?
b. What do you have to do with the other data point to keep the balance point at 6?
c. What is the mean of the two new data points? Is it the same value as the balancing point of the ruler?

Example 2: Understanding Deviations
In the above example using two pennies, it appears that the balance point of the ruler occurs at the mean location of the two pennies. We computed the distance from the balance point to each penny location and treated the distances as positive numbers. In statistics, we calculate a difference by subtracting the mean from the data point and call it the deviation of a data point from the mean. So, points to the left of the mean are less than the mean and have a negative deviation. Points to the right of the mean are greater than the mean and have a positive deviation.
Let’s look at Sabina’s initial placement of pennies at 1 and 11 with a mean at on the graph below. Notice that the deviations are +5 and -5. What is the sum of the deviations?
Similarly, when Sabina moved the pennies to 4 and 8, the deviation of 4 from 6 is 4 - 6 = -2, and the deviation of 8 from 6 is 8 - 6 = 2. Here again, the sum of the two deviations is 0, since It appears that for two data points the mean is the point when the sum of its deviations is equal to 0.

Exercises 3–4
Refer back to Exercise 2, where one penny was located at and the mean was at 6.
3. Where was the second penny located?
4. Calculate the deviations of the two pennies and show that the sum of the deviations is 0.

6. Now suppose you place a penny each at and on your ruler.
a. Draw a dot plot representing these two pennies.
b. Estimate where to place a third penny on your ruler so that the dot plot above. Mark the balancing point with the symbol △.
c. Explain why your answer in part (b) is true by calculating the deviations of the points from 6. Is the sum of the deviations equal 0?

7. Suppose you place two pennies at 7 and one penny at 9 on your ruler.
a. Draw a dot plot representing these three pennies.
b. Estimate where to place a fourth penny on your ruler so that the ruler balances at 6 and mark the point on the dot plot above. Mark the balancing point with the symbol △.
c. Explain why your answer in part (b) is true by calculating the deviations of the points from 6. Does the sum of the deviations equal 0?

Exercise 8
Use what you have learned about the mean to answer the following questions.
8. Recall in Lesson 6 that Michelle asked ten of her classmates for the number of hours they usually sleep when there is school the next day. Their responses (in hours) were 8, 10, 8, 8, 11, 11, 9, 8, 10, 7.
a. It’s hard to balance ten pennies. Instead of actually using pennies and a ruler, draw a dot plot that represents the data set.
b. Use your dot plot to find the balance point. What is the sum of the deviations of the data points from the fair share mean of 9 hours?

Problem Set
1. The number of pockets in the clothes worn by four students to school today is 4, 1, 3, 4.
a. Perform the fair share process to find the mean number of pockets for these four students. Sketch the cubes representations for each step of the process.
b. Find the total of the distances on each side of the mean to show the mean found in part (a) is correct.

2. The times (rounded to the nearest minute) it took each of six classmates to run a mile are 7, 9, 10, 11, 11, and 12 minutes.
a. Draw a dot plot representation for the mile times.
b. Suppose that Sabina thinks the mean is 11 minutes. Is she correct? Explain your answer.
c. What is the mean?