Informal Proof of the Pythagorean Theorem


Examples, videos, and solutions to help Grade 8 students learn the Pythagorean theorem and an informal proof of the theorem.

Classwork
Concept Development
The Pythagorean theorem is a famous theorem that will be used throughout much of high school mathematics. For that reason, you will see several proofs of the theorem throughout the year and have plenty of practice using it. The first thing you need to know about the Pythagorean theorem is what it states:
Pythagorean theorem: If the lengths of the legs of a right triangle are a and b, and the length of the hypotenuse is c, then a2 + b2 = c2.
Given a right triangle ABC with C being the vertex of the right angle, then the sides AC and BC are called the legs of △ ABC and AB is called the hypotenuse of △ ABC.

Discussion
The first proof of the Pythagorean theorem that you will see requires you to know some basic facts about geometry:
1. Congruent triangles have equal areas.
2. Triangles can be considered congruent using the Side-Angle-Side Criterion (SAS).
3. The triangle sum theorem. (∠ sum of △)
a. All corresponding parts of congruent triangles are congruent.
a. For right triangles, the two angles that are not the right angle have a sum of 90°. (∠ sum of △) The following diagram shows a proof for the Pythagorean Theorem. Scroll down the page for more examples and solutions on how to use the Pythagorean Theorem. 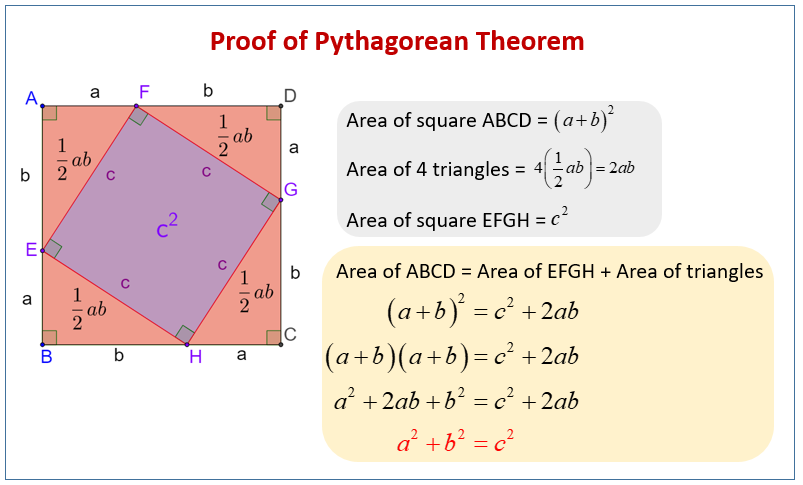 Example 2
Determine the length of the hypotenuse of the right triangle.

Exercises 1–5
For each of the exercises, determine the length of the hypotenuse of the right triangle shown. Note: Figures not drawn to scale.