The following diagrams show how to find the vertex of a quadratic function and use that to convert from the general form to the vertex form. Scroll down the page for more examples and solutions for quadratic equations. 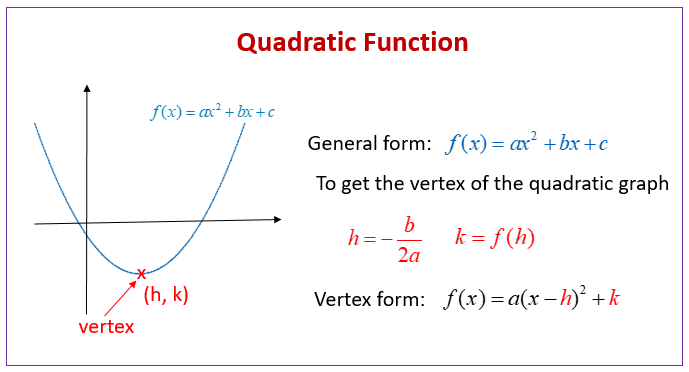 How to solve a quadratic word problem that involves the area of a rectangle?
Example:
Suppose the area of a rectangle is 114.4 m2 and the length is 14 m longer than the width. Find the length and width of the rectangle. Solving Word Problems involving Distance, Rate, and Time Using Quadratics
Example:
Suppose Jessica drove 100 miles and then increased her speed by 30 mph for the following 200 miles. If the second part took 1 hour less than the first part, what was her average speed?

Solving projectile problems with quadratic equations
Example:
Suppose a projectile is launched from a tower into the air with an initial velocity of 48 feet per second. Its height, h, in feet, above the ground is modeled by the function
h = -16t2 + v0t + 64
where t is the time, in second, since the projectile was launched and v0 is the initial velocity
How long was the projectile in the air?
When did it reach its maximum height?
What was its maximum height? Application Problem with Quadratic Formula (Projectile Problem)
A ball is shot into the air from the edge of a building 50 feet above the ground. Its initial velocity is 20 feet per second.
The equation is h = -16t2 + 20t + 50 can be used to model the height of the ball after t seconds. About how long does it take for the ball to hit the ground?