The Nature of Matter

A series of free IGCSE Chemistry Lessons (Cambridge IGCSE Chemistry).
The nature of matter, The states of matter, Separating and purifying substances, Atoms and molecules, The structure of the atom, Electron arrangements in atoms.
The following table gives some Separation Techniques. Scroll down the page for examples and explanations. 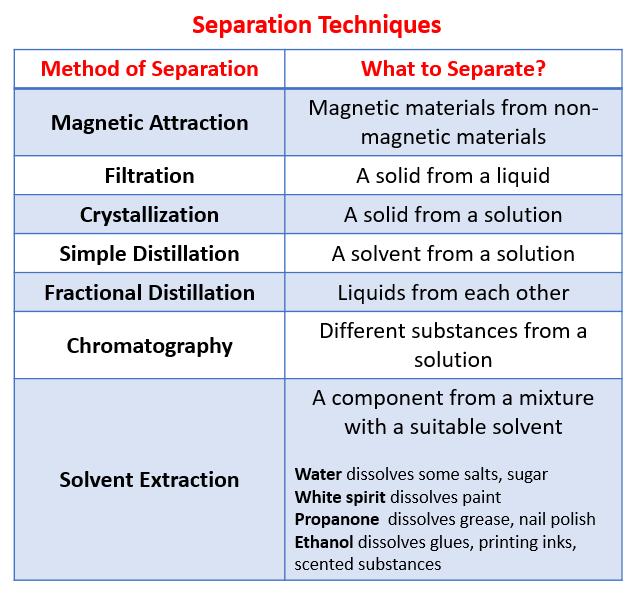 States of Matter and Separation Techniques
The different states of matter, the arrangement and the energy of the particles in solids, liquids and gases.
How to separate various mixtures using techniques such as filtration, distillation and chromatography?
The purity and identity of substances
1) Pure vs mixture.
2) Determining whether a substance is pure or not.
3) Importance of purity of substances in everyday life.
Elements, compounds and mixtures
What is meant by an element, a compound and a mixture?
How the chemical formula can be used to tell us the elements in a compound and the number of atoms of each element?
What is a molecule?

Brownian Motion
Description of Brownian motion.
Bromine diffusion experiment.
Diffusion of Gases
Bromine Diffusion
Ammonia and Hydrochloric Acid
Atomic Structure - The Nuclear Model
Structure of atoms.
Particles in atoms and their relative charges.
Why atoms have no overall electrical charge?
Atomic number and Mass number
How to use the atomic number and mass number to determine the numbers of protons, neutrons and electrons?
What are Isotopes?
Isotopes are atoms of the same element with different mass numbers. They have the same number of protons and electrons in each atom, but different numbers of neutrons in the nucleus.
The relative atomic mass is the average mass of an atom of an element, taking into account of its natural isotopes and their percentage abundance.
Atoms, Elements and Compounds
The structure of atoms, relative atomic masses and isotopes.
Formulae of elements and compounds, and relative formula masses.
Electron arrangement in atoms
Electron energy levels