The Locus of a Moving Point

The following diagrams give the locus of a point that satisfy some conditions. Scroll down the page for more examples and solutions. 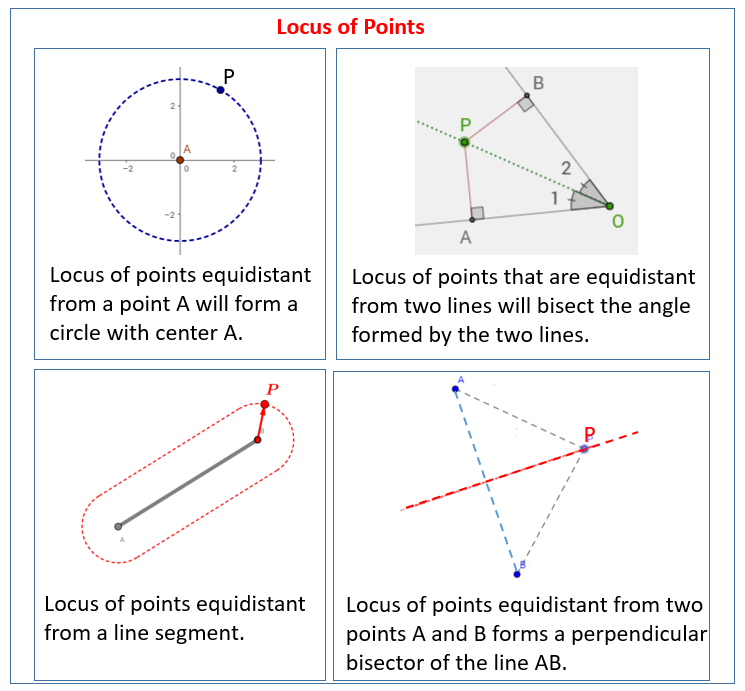 When a point moves in a plane according to some given conditions the path along which it moves is called a locus. (Plural of locus is loci.).

Locus formed: A circle with center Q and radius m.

Construct the locus of a point P at a constant distance of 2 cm from a fixed point Q.

Construct a circle with center Q and radius 2 cm.

Locus formed: A perpendicular bisector of the line XY.

Construct a perpendicular bisector of the line XY.

Construct the locus of a point P that moves a constant distant of 2 cm from a straight line AB.

Construct a pair of parallel lines 2 cm from AB.

The following figure shows two straight lines AB and CD intersecting at point O. Construct the locus of point P such that it is always equidistant from AB and CD.

Construct angles bisectors of angles between lines AB and CD.

Example 2: The distance between the parallel line l and m is 12 units. Point A is on line l. How many points are equidistant from lines l and m and 8 units from point A.

Sometimes you may be required to determine the locus of a point that satisfies two or more conditions. We could do this by constructing the locus for each of the conditions and then determine where the two loci intersect.

Given the line AB and the point Q, find one or more points that are 3 cm from AB and 5 cm from Q.

Construct a pair of parallel lines 3 cm from line AB. Draw a circle with center Q and radius 5 cm.

The points of intersections are indicated by points X and Y.

It means that the locus consists of the two points X and Y.

Given a square PQRS with sides 3 cm. Construct the locus of a point which is 2 cm from P and equidistant from PQ and PS. Mark the points as A and B.

Construct a circle with center P and radius 2 cm. Since PQRS is a square the diagonal PR would be the angle bisector of the angle formed by the lines PQ and PS. The diagonal when extended intersects the circle at points A and B

Note: A common mistake is to identify only one point when there could be another point which could be found by extending the construction lines or arcs; as in the above examples.

3. Draw the locus of a point exactly 3 cm away from straight line AB.

5. Draw the locus of points closer to the line AB than the line BC in the rectangle ABCD.

6. A dog is on a lead tethered to a post in the corner of a garden. The lead is 5 m long. A cat is free to roam all parts of the garden but is not allowed within 3 m of the house by its owner. Show the safe area that the cat can safely roam on the diagram below.