In this lesson, we will learn

The following diagram shows how we can graph a linear equation in point-slope form or slope-intercept form. Scroll down the page for more examples and solutions on how to graph linear equations. 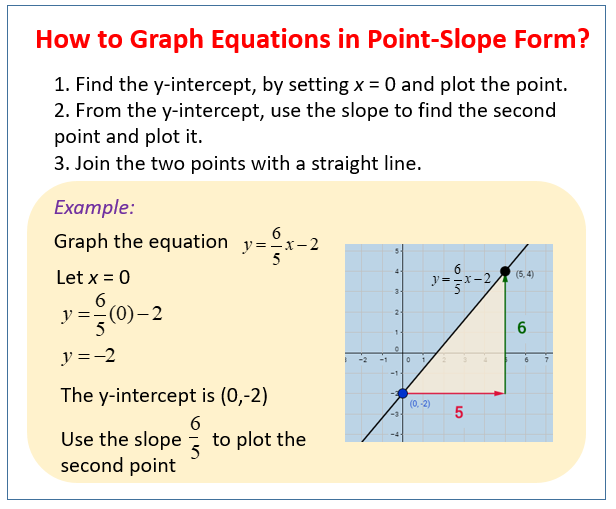 Sometimes we're only given a couple of points on a line and then asked to write a linear equation. When given this information, it's easiest to use point slope form. Point slope form can be written using one point and the slope or when given two points since we can calculate the slope from the two points. Once we have an equation in point slope form it can be rewritten in slope-intercept or standard form.

Graphing Lines using Slope-Intercept Form
When given an equation in the form y = mx + b, or slope-intercept form, we should know how to graph a line without having to compute two points on it. If we have an equation in slope-intercept form, we automatically know the slope and the y-intercept and can use that information to more quickly and efficiently graph the line. Another method of graphing a line is using a table of values or the intercepts.
This video explains how to graph a linear equation given in slope intercept form. How to graph a line in slope intercept form with a positive integer slope and a negative y-intercept? Graphing Lines Using Intercepts
We use many different techniques to graph lines, but one of the most efficient and straightforward, when given the equation of the line, is graphing lines using intercepts. If we are not given a table of values, the easiest two points to find are usually the x- and y-intercepts. Graphing lines using intercepts is not the only method, we can also graph using the slope and the y-intercept.
Graphing Linear Functions by Finding the X-Intercept and Y-Intercept of the Function.
The basic idea and two full examples are shown. Find intercepts, use intercepts to graph linear equation