The sum of the angles in a quadrilateral is 360°

We can also cut out quadrilaterals of various shapes and sizes. Use a protractor to draw arcs between the arms of each interior angle. Cut out each angle along the arc and arrange them so that their vertices are adjacent. We will see that the four angles of any triangle form a full circle (360°). 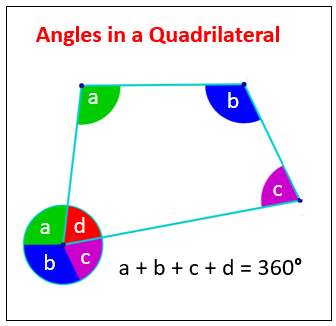 Sum of angles in a quadrilateral
The sum of the angles of a quadrilateral equals 360 degrees. Cut out each vertex and arrange each side adjacent to one another. A 360 degree angle is formed.

We can extend this concept to find unknown angles within quadrilaterals given the measure of any three angles. We can determine the unknown angle measure by subtracting the sum of the three known angles from 360°.

Finding the Missing Angle in Quadrilaterals

Use Algebra to find Angles in a Quadrilateral

Angles in a Quadrilateral

Angles in a Quadrilateral